South Rockport Culverts Should Be Replaced 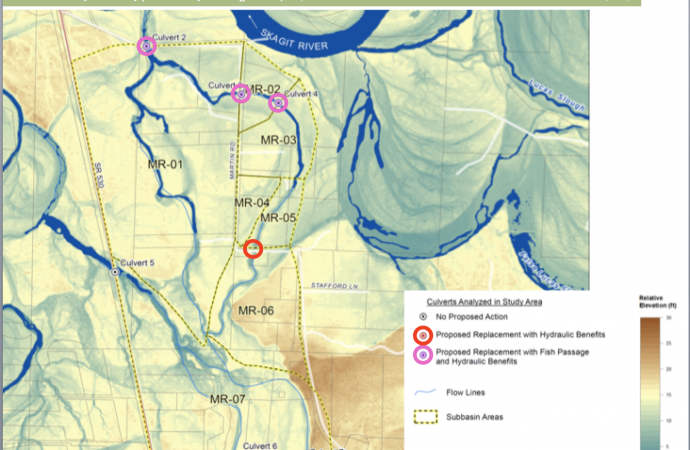 There was a good turnout of concerned neighbors for a meeting December 12th in Rockport regarding the “Barnaby Reach Project,” an initiative spearheaded by the Skagit River System Cooperative. The primary focus of the meeting had to do with recent study work on drainage related flooding in the Martin Road neighborhood area of the project. The meeting also featured an excellent presentation by Erin Lowery of Seattle City Light regarding how dam flows were managed during a November, 2017, flood. Erin’s talk is covered in another article.

To begin the meeting, Project manager Devin Smith stated that the Barnaby Reach Project’s over-riding purpose is to, “revitalize salmon and improve the ecological function of the Barnaby Reach, while addressing community values such as flood and erosion risk reduction.” Smith noted that the project has specific goals, including, “restoring natural flood plain processes to benefit native fish and wildlife.” “There’s also an emphasis specifically on habitat for chinook, steelhead and other salmon species,” he said. “There’s also an interest in protecting private property and timber structures from any potential affects from the project,” Smith said. “And, then, additionally, to include measures to reduce existing flood and erosion risks,” he said. “And, then the last objective is around recreation…to identify potential recreational improvements.”

I was pleased to hear Devin emphasize the importance of protecting our neighbors’ properties from any potential affects from the project!

You can read the formal statement of the project’s purpose, goals, objectives and strategies here:

The main page for the Barnaby Reach Project can be found here:

Devin Smith introduced Leif Embertson, Senior River Engineer for Natural Systems Design, who presented his findings and answered questions regarding recent study work initiated by SRSC in response to community concerns about “localized” flooding relating to culverts and roadways. Natural Systems Design is a Bellingham-based consulting firm specializing in restoration of streams and wetlands and flood protection in the northwest. The work looked at the capacities of culverts in the area, road access during floods and drainage after floods. Thanks, Leif, for your excellent presentation!

Thanks, Russ Dalton and Howard Stafford for contributing your time and expertise in assisting Leif and his staff! It is very important that the wisdom and insights of our neighbors be carefully considered in dealing with the challenges of the Barnaby Reach project.

I appreciated Leif’s twice-stated remark, “All models are wrong; some are useful.” The truth of this observation must remain in our consciousness. Every model, no matter how sophisticated and complex it appears, is always a simplification of reality when it comes to the environment. In our desire for precision and certainty it is common to develop ever more sophisticated models. We will always come up short, but we may suffer the illusion that we can actually predict environmental behavior from models and can rely on them to make big decisions. At best, they are useful, and their limits must be well understood.

To cut to the chase, the basic finding of the study is that most of the culverts are too small and should be replaced. Here is a a recording of a portion of Leif’s talk which includes questions and comments by neighbors in attendance at the meeting. The recording begins just before Leif Embertson began his presentation. The maps and graphics Leif referred to during his talk are below. The last slide shows the culverts that should be considered for replacement. 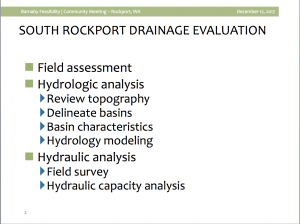 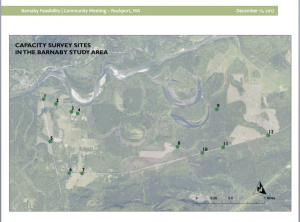 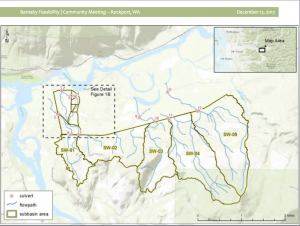 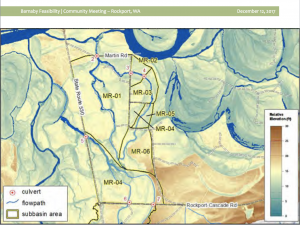 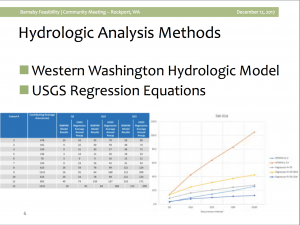 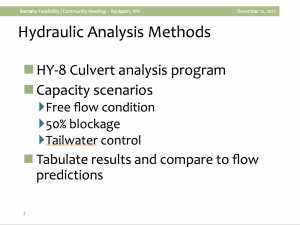 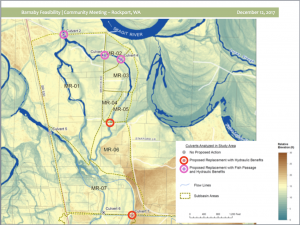 Here is a link to a document containing all of the slides Leif Embertson used in his presentation:

Devin Smith referred to this as a “stand alone project” relative to the Barnaby Reach habitat project, in the sense that problems and issues identified by this work could be addressed separately and independently of anything that happens in connection with the larger project.