Government’s Primary Task is to Protect Life, Liberty, and Property I have grown increasingly concerned about the assaults on property rights in our state. The people of East Skagit County were not consulted on their opinion about elk being transplanted there with tax dollars, causing hundreds of traffic accidents, thousands of dollars of crop damage on many farms, damage to yards and gardens, and now hoof disease. Skagit County citizens were not asked if they consented to 6,000 of their neighbors losing the right to use their already-existing wells for household and agricultural purposes; with a court ruling, nearly 500 homeowners including elderly and veterans lost their water rights as well as up to ¾ of the value of their property. Just like that. Citizens have grown weary of attending dozens of meetings or “conversations” designed to badger them into giving up or acquiescing to manufactured ‘consensus’ relegating them to more loss of private property and crops.

The latest outrage is the unelected bureaucrats’ plan to redirect the Skagit River through Barnaby Slough near Rockport in an attempt to give fish more habitat. Yes, Dept of Fish and Wildlife, Nature Conservancy, and Seattle City Light want to redirect a powerful river, in the third-largest watershed on the West Coast, through an area with many homes. (What could go wrong?) The goal is allegedly to improve fish habitat, but if the goal is to have more healthy fish, why was a local citizen ordered by Dept of Fish and Wildlife (DFW) not to help salmon trapped in creek ‘potholes’ on his property because it ‘wouldn’t be natural? He was ordered not to touch the salmon or help them get to the river even though the creekside sign says “Yours to protect.” It would be funny if it weren’t so sad. Furthermore, if it is a crime to put a 4-inch wide post in the ground near a river or tributary, because the post ‘might’ interrupt the natural flow of water in a flood, it’s odd that it is suddenly okay for the State and Non-governmental Organizations to post multiple pilings in the river in an attempt to redirect it. Seems like just another case of government saying ‘Do as I say, and not as I do.’ Government is forgetting that its purpose is to serve the people and protect their rights.

Our State Constitution puts it succinctly in Article 1, Section 1: “All political power is inherent in the People, and governments derive their just powers from the consent of the governed, and are established to protect and maintain individual rights…(Sec.3) No person shall be deprived of life, liberty, or property without due process of law…(Sec. 16) No private property shall be taken or damaged for public or private use without just compensation having been made…” If Alternative 4 is implemented and if it results in a flood or a loss of property value due to an increased risk of flooding, it stands to reason that the right thing to do is for the entities who caused the redirection of the river compensate the property owner for his or her loss. I am drafting a bill to address this. I also proposed a dozen bills last year to return agency bureaucrats’ rule-making authority to the State Legislature, who are directly accountable to the People and can be fired and replaced by someone who will do a better job listening to the will of the People and protecting their property rights. Five of my agency-authority bills received a hearing but were then blocked from a vote in Committee. We will keep trying; Committee Chairs could change next January. Please continue to stay in touch and let me know of any ways I can be of assistance, and contact my office to receive email updates concerning bills to protect property rights. 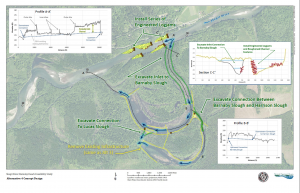