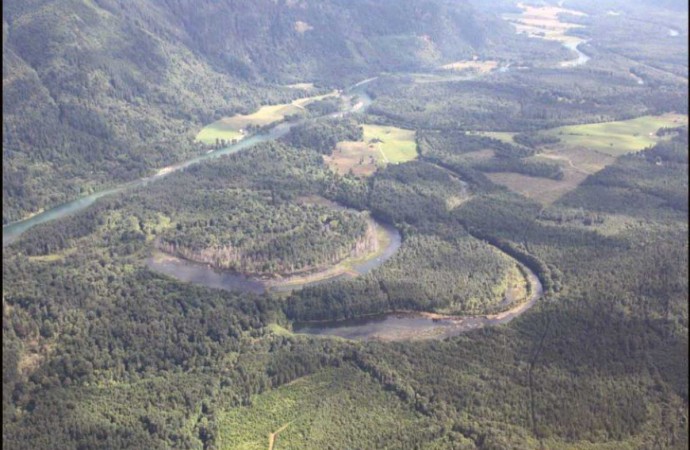 We’ve heard of “moving mountains”, but what about moving RIVERS? That’s precisely what the Swinomish and Sauk-Suiattle tribes want to do. A dangerous plan to excavate a huge, 300 foot wide channel from the Skagit River into Barnaby Slough has been conjured up by the tribes’ Skagit River System Cooperative (SRSC).  Diverting river flow south and west from its main bed, aiming flood waters towards Martin Ranch Road, the south ½ of the Martin Road, the Rockport Cascade Road, and SR 530 will pose a huge risk to homes and farms that, until now, have never be threatened by flooding.

The tribes’ aim is to “restore habitat” and they’ve partnered with Seattle City Light, The Nature Conservancy, and the Washington Dept. of Fish & Wildlife, the large landowners upon which this project would take place. And though the intent is for about 1/3 of the Skagit River to flow through the sloughs, their own hydrologists have admitted that assuring “only” that amount of flow diversion is impossible.

Their objective is to improve salmon habitat, but in reality, it destroys an already rich and productive one. Barnaby, Harrison, and Lucas Sloughs need some TLC, such as cleaning culverts, and much of the SRSC’s thinking about removing impediments is laudable. But, having now decided on the “preferred alternative”, the treacherous notion of diverting the river is beyond belief.  In addition to proposing a potentially perilous and unpredictable outcome to area residents, much of this planning has, seemingly, been concocted behind closed doors, adding to the growing distrust and anger by south Rockportians towards the sponsors.

Dozens of residents living on the south side of the river near Rockport now regularly meet to discuss this deeply troubling project.  We’ve tried to be involved as stakeholders with vested interests in how the project is carried out, but so far, requests to be included on the steering and/or stakeholders committees have been refused.

Through working together,  we’ve learned some disturbing things, such as: 1) private lands have been systematically purchased in anticipation of this project; 2) a number of important and legally required planning protocols have been glossed over and even ignored; 3)the SRSC has dishonestly declared that “everyone living there supports our proposal!”; and 4) the SRSC did some “worst case scenario” flood modeling which disclosed extreme flooding on Martin Road, etc.,quickly backed off, and excluded any of those findings in its feasibility report.

Five generations of families still live here, farms and ranches thrive, home-based businesses, a church and cemetery, county roads and a state highway all would be affected by the potential that this over-zealous project’s “preferred alternative” proposes. And for what reason? To apparently , and arrogantly, attempt to return a portion of the Skagit River to how it may have flowed in the late 1800’s – a fantasy.  Might as well take out the dams, roads, and bridges, too, while they’re at it.

I am reminded of writer John McPhee’s landmark book, “The Control of Nature” when I think of this project’s potential.  And I wonder:  is this eco-meets-ego?  Let’s work for honesty and transparency in this process and find a reasonable solution that both enhances salmon production AND protects the very people and landbase that supports it. Write to your elected representatives – it makes all the difference in the world.