Alternative number four of the “Habitat Restoration Alternatives Assessment for the Barnaby Reach of the Skagit River” proposes diverting up to one-third of the flow of the mainstream Skagit River into Barnaby Slough.

In the document there are a number of risk assessments given for different actions related to the project. Nowhere are there stated any provisions for the well-being of the private citizens in the Martin Road and Highway 530 area immediately downstream of the proposed project if their properties are impacted by unplanned channel migration caused as a result of this project.

For the most part, these people did not ask for this project. They are minding their own business and trying to make a living. These people stand the most chance of being adversely impacted by unplanned channel migration of the Skagit River.

Alternative #4 of the Barnaby Project could jeopardize not only their homes and potentially life and limb, but also an important source of income, wealth and retirement. Their well-being needs to be ensured as much as is possible and should be given first priority in any planning for this project.

Before a single bucket of soil is moved for this project, there should be a clearly defined and mutually agreed upon contingency plan in place, written up, legally binding and agreed to by the people who are likely to be affected should the river shift course through the Martin Road area as a result of the project. The full cost of creating this contingency plan, including legal representation for potentially affected property owners and residents of the Martin Road area, must be born by the Barnaby project sponsors and partner organizations.

At a minimum this contingency plan should:

If it is decided to go forward with Alternative #4, a protective dike on the west end of the project area between Barnaby Slough and the Martin Road area would be a good idea. It would also be a good idea to use local contractors to build this dike. This might look bad to someone from the outside, but it would actually help give credibility to the project from the point of view of most of the people in the potentially impacted area. Local contractors have credibility in their community and they could see firsthand how the project was going and be able to add their input. As a whole, this would give many of the people in the area ownership of the project.

It would also be a good idea to have at least several members of the Martin Road community involved in the decision making process for the project. This could be as members of a steering committee. Whether or not this happens, the whole process needs to be as transparent as possible in order to build credibility. At this point, the credibility of this project seems to be sorely lacking for many of the people in the area.

If the Barnaby Project plan, including the contingency plan, is not agreeable to the majority of the Martin Road community of property owners, the project should not be done or at least, Alternative #4 should not be done.

Any costs for the measures taken to protect the well-being of the people who could potentially be adversely affected by the project should be built into the project from the get-go. As was stated previously, funds should be available to pay any needed compensation to property owners due to damages related to the project before the project even starts.

If this project is as low-risk as it has been represented to be by the Skagit River System Cooperative and its three organizational partners, Seattle City Light, The Nature Conservancy and Washington Department of Fish and Wildlife, a bond or insurance policy for adequately covering possible damages shouldn’t cost that much. If the insurance policy is expensive, then maybe it is not so low-risk after all. If these costs make the project prohibitively expensive, the the project should not be done or at least Alternative #4 should not be done.

One should keep in mind that, out of the blue, these people are not only being asked to risk significant monetary loss, but also potentially life and limb. This is a lot to ask of anyone. Again, I reiterate, the well-being of these private citizens needs to be considered above and before anything else. 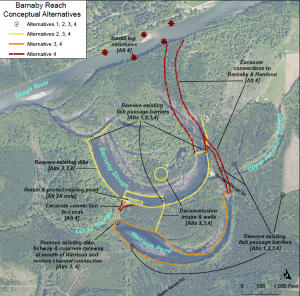