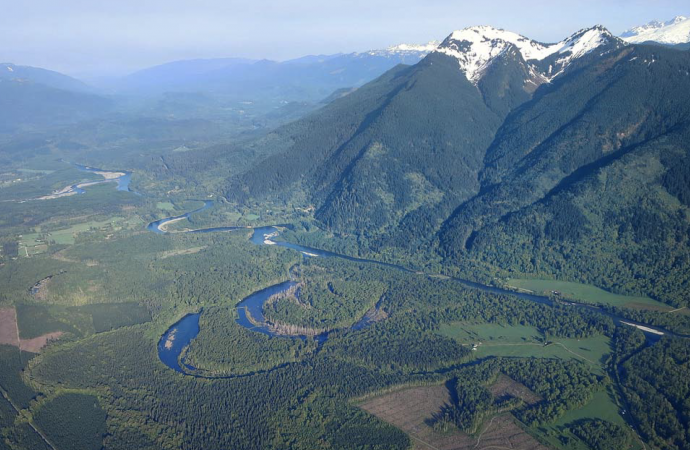 By Dave Hallock with Christie Fairchild and Howard Stafford

The Skagit River System Cooperative maintains a website for the project where meeting reports are available for review, along with other information about the project. You can find the website here: https://barnabystudy.wordpress.com. Quotes here that aren’t attributed to one of us are from the meeting notes prepared by Cynthia Carlstad of Carlstad Consulting.

Hatchery Site Tour in May

Devin Smith reported on the community tour of the hatchery site on May 13th. He stated that one of the strongest messages sponsors heard was a desire that the project be phased. He said that the project sponsors support phasing the project ” as long as the overall vision is developed first.” He said that, “They also support doing separate early action projects sooner, such as options to reduce flood impacts in the south Rockport area. These projects would likely be culvert additions/upgrades.”

Natural Systems Design (NSD) “has completed a capacity survey for twelve culverts located on SR530, Rockport-Cascade Road, Martin Road, and Martin Ranch Road. This work is focused on isolating the effects of local areas so that the source of local drainage related flooding can be evaluated.”

Russ Dalton and Howard Stafford toured the area with NSD consultants to note features and situations they know relate to local flood and drainage issues.

Some of the findings so far include: 1) some culverts appear to be undersized; 2) there are places where new culverts would help with drainage; 3) many smaller drainages off hillsides do not have culverts; 4) Martin Road floods early near the 90 degree bend adjacent to the Bord property; 5) there is a swale that runs through the area that doesn’t have a culvert; 6) raising the road or adding a culvert would help with access during flooding. A full report will be presented at a community meeting in December.

A significant research aspect of this project is the collection of precise topographic data revealing the elevations in the project area. Technology called “green LIDAR” was used to produce the following “relative elevation map” (REM), which shows “the relative difference in elevation between the water surface and surrounding ground.” Leif Embertson of Natural Systems Design, a consulting firm, stated that, “the REM is an important analysis tool to help predict what areas of the floodplain are the most closely connected to the river. “LIDAR” stands for “light detection and ranging,” a sensing method that uses light in the form of a pulsed laser to measure distances to the earth.

This Relative Elevation Map is helpful in visualizing the fact that the elevations of the area of sloughs is very close in elevation to the Skagit River. Everything tinged blue is within five to seven feet of the Skagit. (Click image to enlarge). 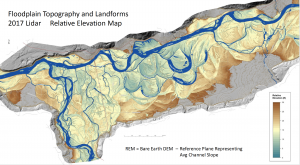 Here is a closer view that includes a graph showing the observed elevations of a cross section of the area (A to A’). (Click to enlarge). Here is a map reflecting a hydraulic model that shows the elevations of bare land relative to the channel bed of the Skagit River. (Click to enlarge). 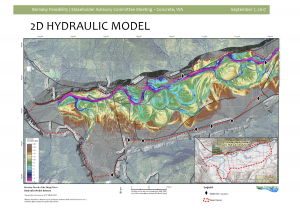 You can visit the Barnaby Project website and view all of the images shared at the Advisory Stakeholder meeting.

The following  image includes a graph showing how the elevations of the Skagit River and points across our neighborhood descend along the sloping floodplain. This information captures the vulnerability many of us feel around any project development or feature which would divert Skagit River flow southwestward across the valley toward our neighborhood. You can see that the west side of Barnaby Slough is about 245′ elevation and Martin Road is about 235′. Though located outside the current FEMA 100 year flood zone, there are several homes situated at the same elevation as the Barnaby which we know will be exposed to greater risk of flooding in the event of a catastrophic flood event. The valley floor in this area is a relatively flat, sloping plane and it would not take much in the way of a major flood event for the Skagit to change direction from its current east-west path and assume a new path across the valley through our residential neighborhood, especially if this project was to include features intended to divert river flow southwestward toward us. 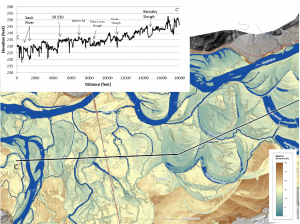 The Sauk River is Large Contributor to Major Flood Events

Tim Abbe and Leif Embertson of Natural Systems Design shared that they are looking closely at the Sauk River because it influences the Skagit in the project area. “They pointed out the difference between the crescent-shaped sloughs in the Barnaby Slough area and the straighter channels in the Martin Road area that are oriented in alignment with the Sauk River. They interpret this to mean that prior to construction of SR530, the Sauk River was dominant in creating landforms in the south Rockport area.”

The Sauk River is considered to be, “the largest contribution to major flood events” in the area. Tim Abbe explained that this is because the Sauk is oriented in a north-south direction. “It capture more of the atmospheric river precipition responsible for fueling most of the largest floods.” Quotes are from meeting report minutes viewable at  https://barnabystudy.wordpress.com.

Although agreeing that the Sauk contributes significant flow, resident Christie Fairchild  noted that only one of the last four flood events was dominated by Sauk River flows. That was a, “rain on snow event,” Christie said, “for which a wild river like the Sauk is far more vulnerable.”

Natural Systems Design is planning on modeling water flows in consultation with several technical advisers in the project’s “Technical Advisory Group.” The technical advisory group is composed of Jon Riedel of the National Park Service; a representative from WSDOT; and a third party consultant which specializes in hydraulic modeling, Northwest . Hydraulic Consultants (NHC). Project consultant Cynthia Carlstad told us that, “NHC is a competitor of NSD, so there is no incentive for them to minimize their critical review of NSD’s work.”

Modeling intends to be informed by the 100-year FEMA flow, the 100-year flow level determined by the Corps of Engineers for the “Skagit River General Investigation Study, plus “high end climate change flow prediction for year 2080 from University of Washington Climate Impacts Group. “The climate change additional flow will add approximately 49% to the 100-year flow,” meeting notes state. (Devin Smith confirmed that the additional “49%” refers to the Corps of Engineers calculation). “NSD will also model habitat flows – low flows to determine what habitat conditions exist at low flows.”

As described in other articles published here, we have ongoing concerns that future events cannot actually be forecast with high reliability based on historical experience. This concern is amplified by all the uncertainty relating to climate change. Jon Riedel noted that, “…because of the freezing level will be higher, significantly more runoff will occur during large rain events.”

This graphic shows historical Skagit River peak flows going back to 1975 at three locations, Concrete, Marblemount and the Sauk River. Some of us are concerned that any modeling of the river needs to include historical information reflecting known significant peak flows. Howard Stafford said, “My biggest concern is that with the models they’re making, they’re not going back to get all the information that is available. They’re not going far enough back on the flood situation. They should be going back to ’89-’90. They’re going to find out that that is some of the highest water that we’ve ever had here.” (Click image to enlarge). 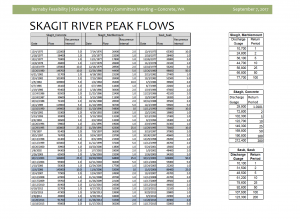 Jon Riedel posed a question to Tim Abbe of Natural Systems Design that we think is important: “How do you use the hydraulic model for floods with the information on bank stability to predict what the long-term impacts of the project alternatives would be? Tim responded, “We want to answer some “what-ifs,” but it will also be a “better” or “worse” response. The models represent the rivers where they are now, but we interpret from the responses we see in the modeling using our experience and professional judgment about large rivers.” Christie comments, “Oftentimes modeling gets the cart before the horse. You’re trying to create a model that justifies and legitimizes your vision, and while it can be a really useful and valuable tool, it’s reliability is very limited and its capacity to predict reality is more apparent than real. In other words, shit happens.”

Though the design idea of constructing a substantial channel to divert significant Skagit River flow into the Barnaby Slough has been tabled for now, the possibility that it would be incorporated into new project plans, leads us to remain vigilant against such ideas. Our consultations with experts in risk analysis leave us fully aware that something like a channel would increase the probability of harm from catastrophic events AND magnify the extent of harm. A problem here is that no one can fully know in advance what would actually occur. What some of us who live and work in the project area do know is that we won’t support any plan that increases our exposure to harm, regardless of any regulatory or political project evaluation criteria.

The project will be formally evaluated on the basis of criteria like the 100-year flood history of the area, modified to take climate change into consideration. Elsewhere on this website we’ve stated our demand that the project be subject to hyper-conservative judgment in view of the fact that it is being developed immediately upstream of a century-old residential and farming community. Christie Fairchild said, “I do not want any diversion of the river at all! The idea that the river can be diverted and controlled is pure hubris!” Christie quoted resident Artie Olson as saying, “The plan to divert the river using engineered log jams is irresponsible and stupid because in  a flood event they would capture floating trees and other debris to form massive obstructions that would likely increase the diversion and even possibly block the whole river.”

Follow us on Facebook to be informed of the time, date and place of a community meeting planned for December. It will likely be at Howard Miller Park on a weeknight. There will be flyers up as well. That meeting will include a report on the results of a local flood and drainage study. Our public Facebook page is the same as the name of this website: Skagit Upriver Neighbors. We will post an announcement of the meeting here.