One moment I wish she’d documented was the response of Steve Hinton of the Skagit River System Cooperative to my question in front of the large group as to whether they’d done “worst case scenario” modeling to give themselves insight as to whether a catastrophic event or serious environmental condition would cause flooding. Mr. Hinton’s response was, in effect, YES THEY HAD DONE SOME. IT SHOWED FLOODING ON MARTIN ROAD. SO THEY STOPPED. 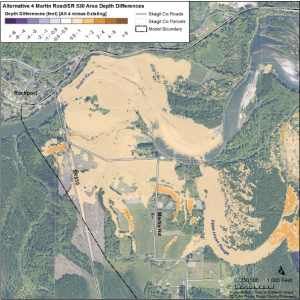