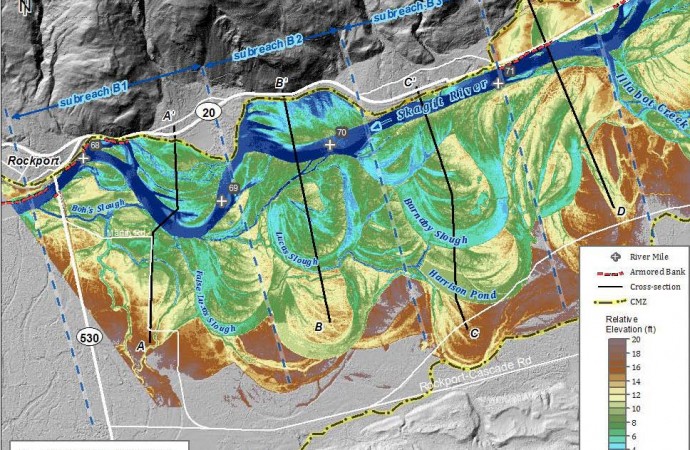 Anyone who takes the time to read what we’ve published on this website regarding the “Barnaby Reach Project” knows that we oppose this project because it creates a public safety threat to our Rockport area residential and farming community. The “Skagit River System Cooperative,” together with Seattle City Light, The Nature Conservancy and the Washington Department of Fish and Wildlife, have joined forces to advance a salmon habitat project immediately upstream of our community. The multi-phase project proposes to construct a long, wide and deep channel from the Skagit River into the Barnaby Slough as a means of introducing water into the slough area for the benefit of juvenile salmon. We support salmon habitat, but not at the risk of increased exposure to flooding in our community.

A major deficiency of this project is that it contains design features that expose our community to catastrophic harm which the project sponsors cannot fully understand or anticipate and, therefore, cannot completely guard against or mitigate. This is because the project contains at least one “black swan” feature, a factor commonly referred to as contributing to “unknown unknown” consequences: the channel.

Without getting fully into the deficiencies of the sponsors’ modeling and analysis, let’s simply observe that they’ve carried out modeling that appears to be more sophisticated that it actually is, and which employs assumptions which neither accurately portray the present situation or comes close to having predictive validity. They’d like us to look at the work they’ve done and nod like turkeys in agreement with it. After all, they paid folks a great deal of money to carry out studies to support their project goals.

The future cannot be predicted, of course, though people fond of modeling pretend that looking out their rear window is a sound way to drive into the future. One condition employed by the project sponsors is the historical 100-year flood history for this area. They’d like us to agree with them that flood risk to our community is minimal based on the use of this modeling condition. Frankly, this is ridiculous. I feel like they’re trying to cover our eyes with a fig leaf.

For one thing, the historical 100-year flood history is meaningless as a measure of the risk associated with building the channel. We all need to realize that construction of a channel just upstream of our community is tantamount to constructing a huge open door invitation for the river to change course from its current direct path west through our section of the valley toward the south west, right toward homes and properties located outside the 100-year flood zone. Consultation with experts in probability have confirmed that such a design feature sets the stage for what are common referred to as “black swan” events, catastrophic occurrences which cannot be fully anticipated beforehand and which cannot be understood as to their consequences. These are also known as “unknown unknown” events, like the devastating Oso slide that took so many lives and did such horrific damage a few years ago. Those of us who responded to that catastrophe can witness to the horror that can occur so unexpectedly in situations where possibilities were not well known. In the language of probability evaluation, the channel increases the likelihood of unknown catastrophic events occurring and the extent of damage and harm done by such events. If you imagine a bell shaped probability distribution curve, the channel feature thickens and lengthens the tail of the curve. We can imagine this reality but not fully comprehend it until it’s too late. Historical analytically derived patterns of environmental behavior cannot reliably contend with black swan scenarios.

Further, though, and irrespective of the channel feature of their plan, the 100-year flood history is a ridiculous basis of passing flood risk judgment on a project immediately adjacent to a residential community. The flood plain here drops gently from east to west and when viewed from above looks a lot like a gently slanted table top. The low berm now bordering the Barnaby Slough is the same elevation as my house not too far away. Given anticipated changes in precipitation and river flow levels, the 100-year flood history is entirely insufficient. Anything done now in the project area, including removal of hatchery structures and berms, should be evaluated by criteria which take into consideration the environmental changes associated with climate change. As for the channel, that’s something the sponsors cannot mitigate because of the black swan nature of it. If a channel were constructed to enable a projected one-third of the Skagit to pass into the Barnaby, the force of that flow under catastrophic scenarios could easily cause a diversion of an unpredictable amount of the Skagit. We expect everyone associated with this project, from the sponsors to the regulators, to exercise extreme conservatism in evaluating the public safety aspect of this otherwise laudable project.

Conservatism with respect to the channel means: do not do this. You cannot mitigate the unknown unknowns associated with the channel.

Conservatism with respect to design factors like past flood history means: employ assumptions far more conservative than this. Everyone with any awareness of what’s been going on environmentally in our area knows that the rare 100-year flood levels of the past are no longer rare. The “State of Knowledge Report: Climate Change in Puget Sound” validates experience we are seeing already. If we are reading the report summary correctly, streamflow volume for the Skagit is expected to increase by an average of 42% relative to the 100-year flood history and by 57% relative to the 10-year flood history. This anticipated future negates the reliability of past experience. Take a gander at this report summary and reflect on whether you think The Barnaby Reach Project’s study reliance on 100-year flood history is sufficient.