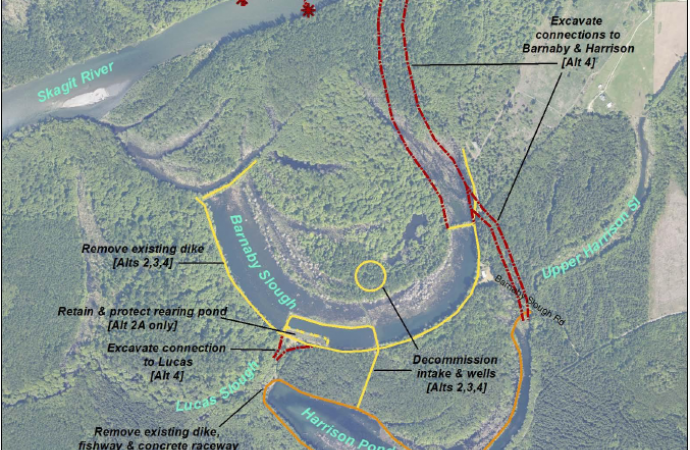 Following receipt of a letter indicating that there will be no meeting of the “Barnaby Project” “Stakeholder Advisory Committee” in the near future, I drafted the following letter to the key leaders of the Skagit River System Cooperative, Steve Hinton and Devin Smith, and their project consultant, Cynthia Carlstad. We’ve repeatedly expressed complete opposition to a highly dangerous project design feature which, to our knowledge, has not been removed from the project plan. We are encouraged that the project leaders are saying that they won’t do anything that results in flooding, but we are not confident at all that their approach to assuring such a future will adequately address the potentially catastrophic consequences of a channel to divert significant Skagit River flow into Barnaby Slough. It felt like a good time to say again in summary fashion what we’ve said repeatedly on this website and in our communications with everyone who has or will have anything to do with this project. We’ve distributed the letter to a wider audience of individuals who should be aware of our concerns. Here’s the letter:

This letter is in response to Cynthia Carlstad’s email of today in which she stated that there would be no stakeholder advisory meeting in August and indicated that there will be no meeting until, “the next phase of technical work is underway.” Inasmuch as there is considerable uncertainty as to the direction you will choose to take with your project and the basis by which you will guide yourselves in terms of protecting the well-being of the community near your project, I want to provide this vital perspective regarding your project. It feels important to assure that everyone concerned with this project understands our concerns.

I’ve reviewed the Barnaby project document entitled, “Barnaby Reach Project: Purpose, Goals, Objectives, and Strategies.” I support your stated goals to, “improve floodplain processes to benefit native fish and wildlife,” and to “increase amount and connectivity of Chinook salmon, steelhead and other salmonid rearing and spawning habitat.” It is also encouraging to read that you have the goal to, “protect property and infrastructure from potential project effects on hydrology and floodplain connectivity,” for which you’ve stated two “objectives,” one being to, “design the project so that it does not increase flood and/or erosion risk to private property and infrastructure,” and the other being to, “include project elements that address uncertainties related to flood and erosion risks and provide protections for private property and infrastructure.” For these objectives you’ve identified several strategies, including, “a. Evaluate and document existing flood and erosion risks for properties and infrastructure in the potential project impact area as a baseline against which to compare potential project impacts. b. Establish and use conservative analytical input parameters and evaluation criteria in flood and erosion risk analysis. c. Design the project to conservatively avoid increasing the risk to other properties. d. Incorporate precautionary flood and erosion risk reduction measures into project design as safety measures.” You also describe two goals for the project to, “reduce existing flood and erosion risks for adjacent communities,” and, “provide recreational access opportunities that meet community, stakeholder, and primary landowner needs.”

I want to take this opportunity to discuss and articulate my driving concerns relating to any project actions or features which have a probability, no matter how low, of causing or contributing to the occurrence of catastrophic events or consequences such as a diversion of the Skagit River across our decidedly level valley floodplain. I’ve previously identified the project design feature of a channel from the Skagit into the Barnaby slough as being a project initiative which increases the probability of an unanticipated consequence that would result in damage and negative effects. I’ve written about this concern a number of times in articles on the website we created to voice and document our concerns and views regarding this project, skagitupriverneighbors.com. You’ve informed me that you have been following our posts to this website, which I appreciate, so I’ll assume that you have a good idea of where we are coming from.

Simply stated, I want you to refrain from taking any project steps which may lead to catastrophic consequences, no matter how low the probability. This is a difficult consideration, of course, as we are dealing here in the realm of what risk management experts refer to as “black swan events,” generally unforeseeable and not generally anticipated occurrences which are well-understood to be among the most catastrophic and environmentally consequential results. I’d like you to fully appreciate the reality that by constructing something like a wide, deep, long channel intended to divert a significant portion of Skagit River flow into the Barnaby Slough, you are in effect creating an opportunity for consequences to occur that you cannot statistically anticipate and cannot fully mitigate. I’ve shared with you the perspective of a probability expert that the channel feature would both increase the probability that rare catastrophic events could occur and would increase the degree of damage that would occur as a result of such events.

In several conversations with you about this matter, it appears a though you may not fully understand this admittedly complex aspect of your project design, planning and evaluation. You may also be inclined to anchor your project in evaluation criteria that ignore or neglect possible but less likely events. I’ve tried to assert that I will not support a project which includes features that could lead to harm to our neighbors’ properties and their well-being, and I’ve tried to be forthright in cautioning that we will seek judicial relief if necessary in the event we conclude that you are following a path that could cause such harm. In a nutshell, we’re not dealing here so much with project considerations that can be modeled with reliability, but beyond that, the realm of low probability consequences associated with events we can’t completely anticipate before they occur.

Naturally, I would like to have more information regarding the criteria and methods you will employ to evaluate the flood risk aspects of your project, as well as the approach consultants and project review and evaluation people will use when considering your project when it reaches the various approval phases. My understanding is that projects like yours are typically evaluated on the basis of 100-year flood experience. We’ve tried to contribute the fact that this kind of approach is entirely inappropriate for a project nearby a residential community and further that far more strenuous criteria must be employed given all the environmental changes occurring in our region. Further, though, we realize, and we hope you do as well, that it is not possible to accurate or reliably evaluate the flood risk associated with a project feature which opens the door for low probability but catastrophic consequences.

We have other concerns regarding your project work and the science associated with it, but I wanted to speak specifically to the concerns I’ve discussed here. I will appreciate the opportunity to discuss them further with you and gain a good understanding of how you intend to assure achievement of the general flood risk goals and objectives you’ve stated.